If you’ve hit a pipe and there’s water leaking out everywhere. You must try to do TWO things.

1) Turn off the water (obviously)

2) Turn off your boiler at the wall switch. The boiler is usually the white boxy thing with the little gas flame in it (You’d be surprised how many people ask….) If your boiler runs dry, and it’s still on, you can do a LOT of damage. Let’s face it, if the place is flooded, you’ve done quite a lot of damage already. Let’s not add to it. It might not be a water pipe that feeds the boiler, but best be sure.

I’ve also got some bad news. Turning off the water won’t necessarily stop your pipes leaking – it all depends which pipe is leaking. So get some blankets, and sit tight until someone can get round there.

Turning off your water. If you’ve found the stopcock, and it won’t budge, do NOT try to force it. If you do, the metal could shear off, at which point you’ll have another leak, and a whole other heap of trouble.

Finding the stopcock or valve of some sort.

You’re looking for something that looks a bit like this:

or it maybe a red wheel-headed one like this: 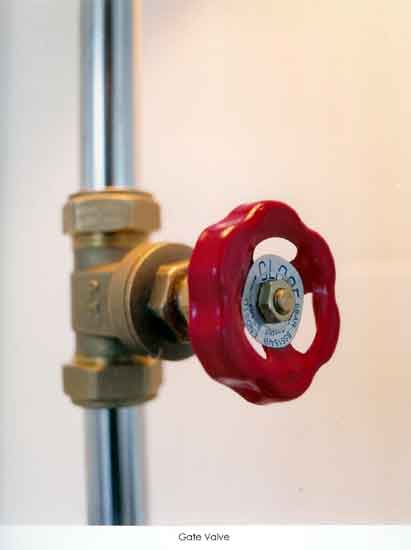 To turn it off remember this rule: “Clockwise closes”.

Remember, don’t force it if it won’t budge. It can break, and then the stopcock will leak as well. You really don’t want that to add to your woes.

then it’s already off!

If it points along the pipe it’s on.

Perpendicular to the pipe (like in the photo) is shut.

Then it’s unlikely to be a stopcock. However, for future reference, the photo shows it in the “off” position.

To turn it on, you need a normal “slotted” screw driver (ie., not a cross-headed one). Put it in the slot, and turn it 90 degrees. Then it’s open.

But hey, we’re supposed to be turning water off, not on. What are you up to?

OK, now you’ve done your best, but still no joy. Time to call someone.

Alternatively, you could try these guys:

* The CIPHE (Chartered Institute for Plumbing & Heating Engineers) have a good database of plumbers. They also have a code of practise, which makes them a cut above the rest. (Better than finding someone at random in the Yellow Pages). You can find a member near your house by putting in your postcode.

* Alternatively, British Gas, Thames Water, and many, many others have a range of emergency services that you can use to find people to come out at short notice.

Stick the kettle on…

This site uses Akismet to reduce spam. Learn how your comment data is processed.

Send me a message